This summary report will cover:

Need a refresher on the OPCW, CWC, or Executive Council? Check out these short educational videos produced by the OPCW.

Please note: selected quotes are not necessarily representative of the views of the CWC Coalition or any of its members. Quotes are selected to highlight the diversity of opinions in the OPCW, and we try to find quotes that summarize the views of more than one country. Quotes will not always reflect all view points – they serve an educational purpose, but are not intended to give the reader a full understanding of all perspectives on each of these complex issues.

Since Russia invaded Ukraine in February 2022, there have been numerous allegations regarding chemical weapons use, false flag preparations, and chemical facility targeting. The OPCW is maintaining a public record of correspondence of all accusations and counter-accusations. During EC-100, Russia once again presented unfounded claims that Ukraine would conduct a false flag chemical provocation, prompting many delegates to walk out of the meeting. Multiple nations spoke on the need to address misinformation in their national addresses.

“Over recent years, we have seen a number of violations of the Chemical Weapons Convention and of the global norms at its heart – in particular the prohibition against the use of chemical weapons. We have seen politically motivated attacks on the independence, transparency and impartiality of the Technical Secretariat. And we are seeing an increase in mis- and dis-information campaigns designed to undermine the Organisation, sow confusion among Member States and distract attention away from serious questions regarding compliance with the Convention.” – Statement by H.E. Amb. Susannah Gordon, Permanent Representative of New Zealand

“I would like to denounce in the strongest possible terms the groundless allegations made by Russia, which have proliferated in the last few months. We deplore the fact that Russia is using the OPCW as a platform for propaganda purposes. In doing so, Russia seeks to justify the unjustifiable, namely its war of aggression against Ukraine. The verbal notes sent by Russia are part of this strategy of disinformation and manipulation of information.” – Statement by H.E. M. Luis France Vassy, Permanent Representative of France

Multiple chemical facilities and tanks holding chemicals have been damaged since Russia invaded Ukraine in February. In May, shelling near Severodonetsk damaged the Azot chemical industry complex and a railway tank containing nitric acid. Targeting of non-legitimate military objectives, such as a civilian chemical facility, is prohibited under international humanitarian law. The conflict in Ukraine has highlighted the need for better international law protecting chemical and nuclear facilities. In a 12 April statement, the OPCW confirmed that the organization has been “uninterruptedly monitoring the situation around declared chemical industrial sites in Ukraine.”

“As I write this message and we convene the 100th session of the Executive Council, while the belligerent parties are clashing in the Severodonetsk area, which is known to be an industrial chemical risk zone. At any moment, a chemical catastrophe is possible, and it is not enough, periodically we are forced to read about possible chemical attacks, traps with dangerous aggressives or false flag operations.” – Statement by H.E. Giogio Novello, Permanent Representative of Italy

Fernando Arias, the Director-General of the OPCW, identified achieving gender equality and geographic diversity in OPCW Technical Secretariat staff as critical goals. The OPCW recently undertook a Gender and Diversity Audit, and during EC-100, several nations called on the organization to swiftly implement the recommendations of the audit and to share the results of the implementation with the States Parties.

“Canada is pleased to recognize the commitment of the Technical Secretariat in advancing gender equality and diversity in the OPCW and is encouraged by the efforts to implement Gender and Diversity Audit so far. This is a cultural change that requires prolonged and sustained effort. But inclusion is the way of the future, and it makes every organisation better.” – Statement by the delegation of Canada

During CSP-26, fifty-five member states produced a joint statement regarding the poisoning of Alexei Navalny in Russia. At the 98th Executive Council session (EC-98) in October, the UK and 44 other member states submitted four questions to Russia, asking Russia to explain what steps it has taken and what steps it plans to take to address and investigate the Navalny poisoning. There has been no progress in launching a Technical Assistance Visit to Russia to investigate the incident. During EC-100, many nations once again called on Russia to transparently comply with the OPCW to investigate the matter.

“In the case of the documented poisoning of Alexei Navalny with a nerve agent of the ‘Novichok’ group in 2020, Russia neither initiated an independent investigation nor co-operated with the OPCW, although it is obliged to do so under the CWC. […] If Russia were seriously interested in a credible clarification of the allegations, it could have used the existing mechanism under Art. IX to clarify alleged treaty violations.” – Statement by H.E. Heinz Walker-Nederkoorn, Permanent Representative of Switzerland

Ahead of the Fifth Review Conference in May of next year, several nations highlighted the important role that civil society will play in helping States Parties set a strategic direction for the OPCW for the next five years and beyond.

“In view of the Fifth Review Conference, a substantive, thorough and inclusive process will be essential in order to provide guidance to the Technical Secretariat. The European Union is convinced of the importance of engaging all relevant stakeholders in the preparatory process, ranging from chemical industry to think tanks, civil society organisations and nongovernmental organisations.” –  Statement by H.E. Ambassador Katerina Sequensová, Permanent Representative of Czech Republic, on behalf of the E.U.

Promoting the Peaceful Uses of Chemistry

“The NAM CWC States Parties and China reaffirm that Article XI deals with one of the core objectives of the CWC and is essential for the realization of the object and purpose of the Convention. We attach great importance to the full, effective, and non-discriminatory implementation of all provisions of this Article in a manner which avoids hampering the economic or technological development of States Parties, and international cooperation in the field of chemical activities for purposes not prohibited under this Convention, including the international exchange of scientific and technical information and chemicals and equipment for the production, processing or use of chemicals for purposes not prohibited under this Convention. We also emphasize the need to strengthen and expedite efforts in the economic and technological development of the States Parties.” – Statement by H.E. Fikrat Akhundov, Permanent Representative of the Republic of Azerbaijan, on behalf of the members of the Non-Aligned Movement and China

“For our part, the United States continues to uphold its obligations under the Convention to eliminate the remaining U.S. chemical weapons stockpile in Pueblo, Colorado, and Richmond, Kentucky. The United States has destroyed over 98 percent of its stockpile since entry-into force, with only 542 metric tonnes, or 1.95 percent, remaining to be destroyed. […] Once public health and safety concerns improve, we endeavor to host an in-person Executive Council visit as we near the end of the U.S. stockpile destruction process.” – Statement by H.E. Amb. Joseph Manso, United States of America

At the second half of the 25th Conference of the States Parties (April 2021), the States Parties voted to suspend Syria’s rights and privileges under the convention until it addresses 19 outstanding issues regarding its initial declaration of its chemical weapons stockpile and program. Syria’s rights and privileges will be reinstated once the Director-General reports that Syria has taken the necessary measures to come back into compliance. A June 23 report by the Director-General confirmed that Syria has not completed any of the measures. Planning continues for a possible meeting between the OPCW and Syria’s Minister of Foreign Affairs, Mr. Faisal Mekdad. Several nations once again expressed their opposition to the Investigation and Identification Team (IIT).

“Through its note verbale dated 20 May 2022, the Secretariat proposed that, subject to a change in attitude by the Syrian Arab Republic, shortcomings in the Syrian Arab Republic’s initial declaration be addressed through exchange of correspondence for the time being, even if such exchanges demonstrably bring fewer outcomes, as compared to the DAT’s deployments to the Syrian Arab Republic. […] In response to the Secretariat’s note verbale, H.E. Mr Faisal Mekdad, Minister of Foreign Affairs and Expatriates of the Syrian Arab Republic, sent a letter to the Director-General dated 31 May 2022 agreeing to the exchange of correspondence. He acknowledged that such an exchange cannot replace consultations between the Syrian National Authority and the DAT, while at the same time continuing to set the exclusion of the DAT’s lead technical expert as a condition for the holding of the twenty-fifth round of consultations.” – Report by the Director-General on Progress in the Elimination of the Syrian Chemical Weapons Program

“Should chemical weapons be used we will ask for help with establishing the facts on the territory of Ukraine. Russia must be held to account. I am grateful to the Secretariat for the work that it does, to the highest professional standards. This includes the monitoring of breaches of the Convention, including allegations of use of chemical weapons, and assisting States Parties when needed, in line with the provisions of the Convention. In accordance with Article VIII, paragraph 38 (e) of the Convention and Article X, paragraph 5 (b) Ukraine has requested a) technical assistance from the Technical Secretariat; and b) expert advice and assistance in identifying how Ukraine’s programmes for the development and improvement of a protective capacity against chemical weapons could be implemented.” – Statement by H.E. Amb. Maksym Kononenko, Permanent Representative of Ukraine

Full implementation of the Chemical Weapons Convention depends on individual nations  enacting domestic laws that conform with their treaty obligations. However, as of 4 September 2020, 38% of States Parties still did not have the minimum legislative measures in place. Multiple nations underscored the need to focus on national implementation during the Fifth Review Conference.

“Kenya recognises and appreciates the work being done by the International Cooperation and Assistance Division, particularly on the push to ensure a greater number of African State Parties have national implementation legislation for the Convention. Kenya is making progress on domestication of the Convention and we look forward to working closely with the Secretariat through mechanisms that will help in the sensitisation of critical decision makers, with the view of simplifying and fast tracking the process of domestication.” –Statement by Amb. Judith Sijeny, Permanent Representation of the Republic of Kenya

Several nations highlighted topics they hope to see discussed during the Fifth Review Conference (May 2023). Held every five years, the Review Conference is “an opportunity for all States Parties to review the operations of the Chemical Weapons Convention and set a strategic direction for the OPCW for the next five years and beyond.”

Fifty-two nations supported a joint statement condemning Russia’s invasion of Ukraine and denouncing Russia’s “unsubstantiated claims that Ukraine is using or is preparing to use chemical agents in Ukraine.” 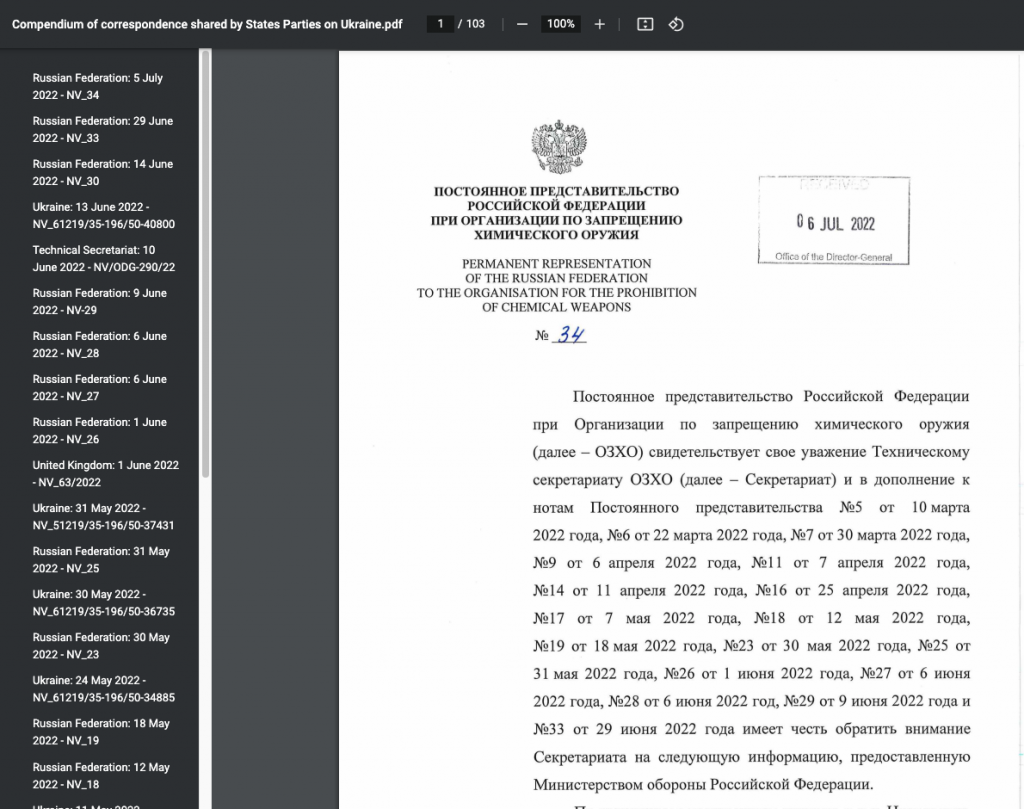 The OPCW has published over 100 pages of correspondence from Ukraine, Russia, and other States Parties with the OPCW, featuring allegations of chemical provocations, planned false flag incidents, and concerns about the safety of chemical facilities. This document is updated frequently by the OPCW.